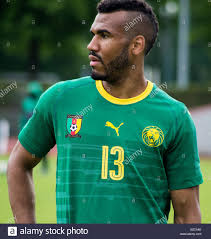 Eric Maxim Choupo Moting are his names who is one of Cameroon’s top football players in terms of the top football club, performance and decorations are currently not having a club as his contract with his popular Club Schalke 04 in the German Bundesliga expired a month ago that is the 1st of July 2017.

He has not yet been able to be signed by a different Football club, the big question is could it be his fault or the fault of his football agent.

In one month time, August 31 at midnight to be more precise, the transfer window will be closing in major European Championships. But several Cameroonian footballers are always looking for a new base. This is the case of Eric Maxim Choupo-Moting whose contract with Schalke 04 expired since July 1. The Cameroon international, who spent one season no less difficult in short Bundesliga in vain behind a concrete offer. There would have been a high probability to see him join the colony of Cameroonian footballers in Turkish land, we don’t still have a clear idea of his future destination. A move to Besiktas and Antalyaspor was in the air a few weeks ago but the subject was no longer mentioned and that keeps his fans doubting.