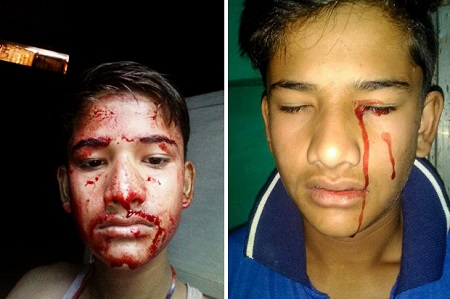 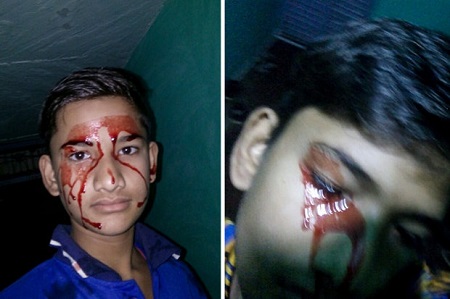 This is Akhilesh Raghuvanshi, a young boy who has been oozing rivers of blood after suffering from the mysterious condition since he was just 10 years old.

According to Daily Star UK, the boy who is now 13, bleeds from his ears, eyes, mouth, legs and even his hairline up to ten times a day.

And the rare affliction – which replicates the wounds Jesus is said to have endured when he was crucified – has left the poor lad in excruciating agony and fearing for his life.

The bizarre phenomenon inspired Hollywood blockbuster Stigmata, starring Oscar-winning actress Patricia Arquette – famed for her roles in Boyhood and Boardwalk Empire – who played an atheist attacked by an unseen force.

But real life stigmata is said to affect a tiny number of people across the globe. Akhliesh loses blood without being actually cut or scratched.

The teen has baffled top docs who remain perplexed about the root of his condition, which triggers extreme exhaustion and crippling migraines.

His parents initially suspected he was dehydrated – and medics now believed he could have an ultra-rare condition similar to haemolacria – which gives sufferers half blood tears.

But they have been unable to officially diagnose him. Now Akhliesh is desperate for a cure.

“It may happen once or may be 10 times in a day. Sometimes, the bleeding will stop and won’t happen for months.

“But in the past 15 days, I have bled almost everyday. It doesn’t hurt when the bleeding starts but it makes me tired and sometimes I have headaches.”

Akhilesh from Ashoknagar in Madhya Pradesh, India, usually is affected in the mornings.

The family contacted a local doctor about his bizarre condition last July, and was referred to experts at All India Institute of Medical Sciences.

He spent a month under observation, but boffins at the top university were left scratching their heads.

His dad, Arun, a farmer, has launched a desperate appeal for help in a bid to understand his son’s condition.

He said: “I have seen the best of the best doctors in India. None of them seem to understand what this disease is and how it can be cured.

“So far my son was bleeding from his eyes, nose, hairline, neck and legs. But now the things are getting bad to worse as he has started passing blood through while urinating.

“I fear for my child’s life now. The medical science must have an answer to it. I appeal to the doctors of the world, please intervene and help save my son.”

The schoolboy is currently being observed at home by doctors from the state health department – but they are still baffled.

His case is similar to Dimple Dwivedi, 14, from Lucknow, who also cried tears without any obvious cause.

Mr. Raghuvanshi added: “I hope my son’s condition offers the medical fraternity an opportunity to investigate the case once again and come up with some solution to the problem.

“I appeal to the international medical fraternity to come forward to help save my child and rid us of the endless pain and agony.”