Bandy Kiki is a young Cameroonian Blogger who runs and operates the popular blog Kinnakasblog and KinnakasTV. She is from Banso but based in the United Kingdom.  Kinnakas blog is arguably one of the most visited blogs in Cameroon (English Cameroon in particular) with over 120.000 monthly visits.

She was highly adored by many for her hardworking career as a blogger and constant post. Recently she has been a topic on its own after she regularly condemns popular temporal interim leaders of the consortium (English Cameroon Civil Society) Tvo Tapang and Mark Bareta.

These two (Ivo and Mark) have gained huge praise from the majority of the anglophone population for their outspokenness, influence, and dedication in the recent ongoing Anglophone Crises. While they are putting their names and lives on the line to revolutionalized change in English Cameroon Bandy Kiki dedicates her time condemning them regularly with little or no facts. From research and statistics, the majority of the anglophone population dislikes Bandy Kiki.

Three occasions have come up where Bandy Kiki breaks the internet with her post and is heavily criticized and threaten.

3. She recently posts a letter written by a Southern Cameroonian to Tapang Ivo. Question, why didn’t the person writes directly to Tapang Ivo rather than doing it openly. Ivo is hailed by many Anglophones and therefore any means to degrade his way means the person doesn’t support the struggle. Ivo and Mark are not perfect and prone to mistakes, but the truth is clear they will go down in history for voicing our their views and asking for a change in Cameroon. It takes a lot of balls to voice out such struggles knowing fully well that you are working on hot rods. 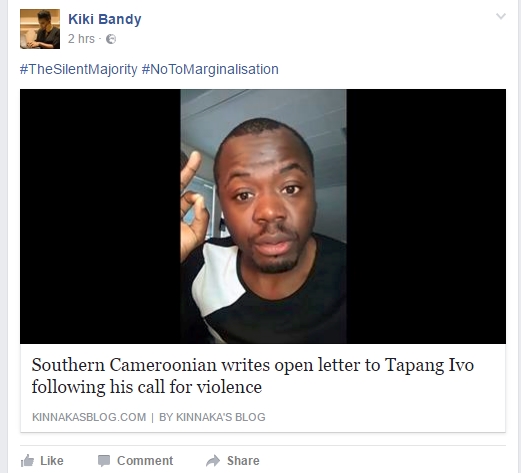 To conclude this, as a blogger you will receive negative comments, threats every day about some of your post but we as bloggers have to know our main goals and who we target. The anglophone crises is not a joke anymore because people have died and some have been heavily affected. The Anglophone population relies on Mark Bara and Tapang Ivo to lead them into victory and they have proven that they are ready to go miles to influence the government intervention in a positive way. Hundreds of people have been arrested unfairly and are been maltreated. If Bandy Kiki question their leadership then she should stand as a leader since she has huge social media following. Instead of relaying information that discourages the people should PV Mark and Ivo and correct their wrongs rather than pulling traffic in her website.

Her reactions may appear as a stunt to her and pull traffic to her blog but a lot of people are hurt and angry and it won’t appear as a joke if someone targets her.

NB: This is not a hate Post, Just a review