Cameroon Will No Longer Host the upcoming AFCON 2018 as The Confederation of African Football (Caf) has kept the continent on their toes regarding the fate of the country.

After speculation broke out earlier that Cameroon will lose their hosting rights for the 2019 Africa Cup of Nations, Caf only held their meeting later in the afternoon to decide on the matter.

It took until the evening for Caf to finally confirm that Cameroon won’t host the 2019 Afcon. This followed The Extraordinary Executive Committee meeting which was held in the Ghanaian capital of Accra on Friday.

Over recent months the confederation has stated that they were not satisfied with Cameroon’s preparations. Now, with the tournament drawing even closer, to be held from June 15 to July 13 next year, time was running out for the Afcon champions.

Caf released the official result of their decision, ironing out their reasons for changing the Afcon hosts in the following statement. 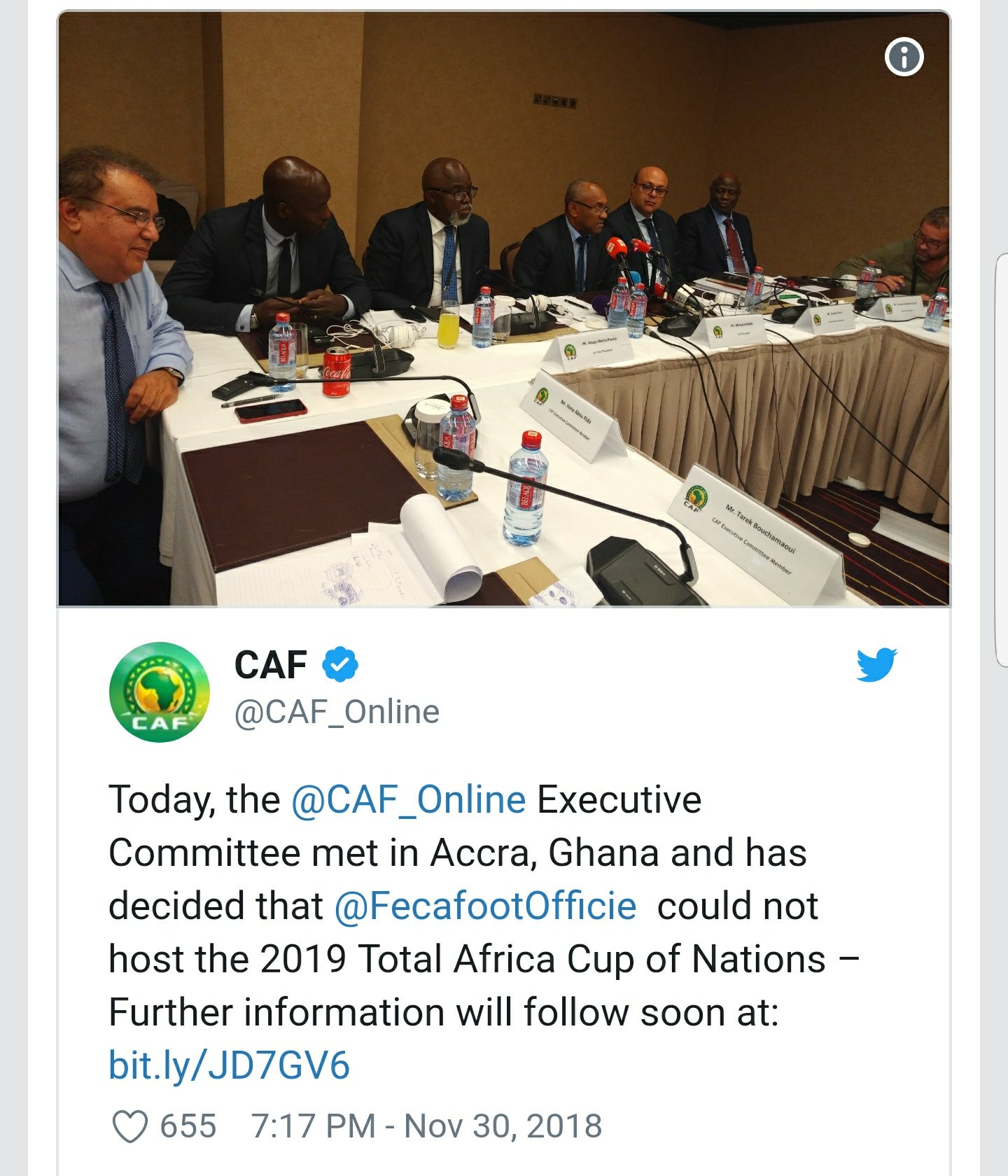 “Caf concludes that the Africa Cup of Nations could not be exposed to any issues that could impact on the success of the most prestigious African competition,” read Caf’s statement.

“After having considered that a simple postponement of the tournament was impossible because of Caf’s contractual commitments, and the importance of maintaining the competition calendar, the Caf Executive Committee decided that the next edition of the 2019 Africa Cup of Nations could not be held in Cameroon.

“This decision, without appeal, will mean that CAF will now initiate an open and urgent call for new host country bids to ensure Afcon 2019 takes place next summer.

Caf unequivocally reiterates its strong commitment to work closely with Cameroon’s government authorities to mutually agree on a new Afcon framework and timetable – should it agree to host a future edition,” the statement concludes.

Following the last inspection conducted in August, Caf noted “significant delays” as their cause for concern back then.

“Regarding the Total Africa Cup of Nations, Cameroon 2019, the delegation for the last inspection visit reported on the progress of works. A visual report revealed a significant delay as far as the delivery of infrastructure is concerned,” stated Caf in the previous statement.

“The final decision will be taken in late November after the last inspection visit which will involve audit firm, Roland Berger. Beforehand, a joint Caf and Fifa Committee will travel to Cameroon in October to study security issues.”

Cameroon’s capacity to host an expanded 24-team tournament has always been under severe scrutiny after they were initially handed rights to organize an Afcon with 16 participants.

Speculation that the tournament might be taken away from Cameroon heightened when Union of Arab Football Associations president Turki Al-Shaikh pledged support for Morocco to host the Afcon instead of Cameroon.

“As President of the Arab Football Federation, I declare my full support to the brotherly Morocco to host the African Cup of Nations instead of Cameroon, and I am also announcing the mobilization of all our resources in the case of a need if the Moroccan brothers ask us,” Al-Shaikh wrote on Twitter.

Al-Shaikh was the chief financier of Egyptian club Pyramids FC until recently. Morocco, South Africa, and Egypt are reportedly in the running to replace Cameroon as 2019 Afcon hosts.