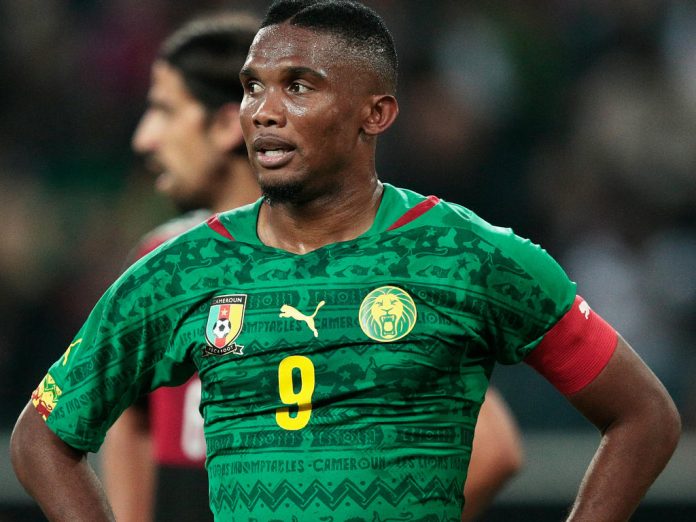 In Cameroon, most consider him as Cameroon’s “True Superstar”. The formerly indomitable lion attacker, calls time on a career in which he’s established himself as Africa’s greatest ever player

When evaluating Africa’s greatest player of all time, five names stand above the rest: Didier Drogba, Yaya Toure, George Weah, Roger Milla and Samuel Eto’o, but according to many sports pundits and soccer stars, the greatest of these is Eto’o, who announced his retirement on Saturday.

This quartet has won more in terms of major individual, club and international honours than Africa’s other elite stars, but even among such exalted company, Eto’o stands above the rest, even though he didn’t have the innate quality of Weah, who remains, to this day, the only African player to win the Ballon d’Or.

Certainly, Eto’o didn’t produce the kind of moments of magic that the Liberia president did during that famous goal for AC Milan against Hellas Verona, for example, and indeed, it’s hard to find too many players in history—let alone African stars—who could match that show of technique, invention and balance.

However, Weah’s trophy haul, for one so talented, can’t match Eto’o’s.

Two Serie A titles were all that the ex-striker had to show for his time in Italy, where he arrived at Milan in between two fine cycles, while a Ligue 1 crown with Paris Saint-Germain and an FA Cup with Chelsea were scant rewards for one so talented.

At the international level, obviously, it isn’t truly a level playing field, although while Weah’s two Africa Cup of Nations appearances with the Lone Stars represent an admirable achievement, he never made a mark on the continental showpiece nor graced a World Cup.

It’s a similar story in the international arena for Drogba when compared with Eto’o.

Admittedly, he spearheaded a star-studded Cote d’Ivoire side at three World Cups—including their first in 2006—but it was a significant failure for the Golden Generation that they never advanced past the group stage.

Also, Drogba’s Elephants failed to clinch the Afcon title during his four attempts at the gold, with the Ivorians’ failures becoming almost comical for a side so rich in quality and depth.

Of course, Drogba has the club honors to compete with any of Africa’s greatest; four Premier League titles, four FA Cups, and the Champions League in 2012, but even here, he’s eclipsed by Eto’o’s haul.

Drogba was a big-game player; Sir Alex Ferguson claimed that he won the UCL for Chelsea almost single-handedly, while he remains the only player to have scored in four FA Cup finals.

However, this is hardly an area where Drogba truly eclipses Eto’o, who scored in two Champions League finals, and was the Man of the Match in 2006.

Indeed, Drogba and Weah’s combined four—or five if you count the France Football/Caf award overlap—African Footballer of the Year awards can only match Eto’o’s four awards won, a testament to his top-end consistency during a competitive period for African talent.

The only player to match Eto’o’s four-APOTY award haul is Toure, who won the award in consecutive years between 2011 and 2014, and perhaps the Ivorian powerhouse comes closest to matching the Cameroonian’s legacy.

Toure, after all, succeeded where Drogba failed to win the Nations Cup, while he similarly clinched Champions League gold with Barcelona.

Like Eto’o, he was a part of three fine sides, and he was influential in major successes—notably scoring 20 goals from central midfield as Manchester City won the Premier League in 2014.

He was a big-game player too—who could forget that FA Cup-winning strike against Stoke City in 2011?—or his performances en route to the Elephants’ Afcon success four years later.

However, while no one could touch Toure between 2011 and 2014, his career successes as a whole don’t eclipse Eto’o’s achievements, even though the latter has the advantage of being a striker, and therefore of being a more visible element in major successes.

Nonetheless, it was a case of ‘anything Toure can do, Eto’o can do better’.

Toure won one Afcon title with the dying embers of the Elephants’ Golden Generation, well Eto’o won two with the fine Cameroon side of the turn of the decade.

He also figured in the Olympic success of 2000, where the Indomitable Lions clinched gold in Sydney.

While Toure stepped into an unfamiliar central defensive role as Barca won the Champions League in 2009, Eto’o had been a central figure in their two previous successes—in 2006 and 2008.

Indeed, as noted above, the forward scored in both of those finals—only the second player in history to net in two such matches—and was lauded for his modified role in Internazionale’s unlikely UCL success under Jose Mourinho in 2010.

That one of Eto’o’s greatest achievements came while playing a largely support role on the right side of the Nerazzurri’s front three says a lot for his professionalism and selflessness, both qualities that were in question when Pep Guardiola opted to offload the frontman from Barcelona.

Eto’o’s achievements at the pinnacle of the European game set him apart from his peers; he was the first player to win two continental European trebles, and the fourth in history to win the Champions League in consecutive years with two different clubs.

While Toure featured just 10 times in 2017-18 as he won the fifth major league title of his career, Eto’o scored 25, 26, 30 and 12 (at Inter) in each of his four title-winning campaigns. Here was a player who was a difference-maker and a genuine decider in all of the successful teams in which he played.

He retires as the all-time top scorer for Cameroon, for RCD Mallorca, and in the Africa Cup of Nations, having scored 18 goals across six editions, eclipsing the record set by Laurent Pokou of the Ivory Coast 38 years previously.

Pokou and Eto’o are two of only three players to have retained the Golden Boot outright, and remarkably, the forward’s international could have been more verdant had he not called time on it after 118 caps following the 2014 World Cup at the age of 33.

There will be regrets, certainly—what could Eto’o have achieved had he not moved to Anzhi Makhachkala in 2011?—but as the Indomitable Lion calls time on his glittering career, he can step away from safe in the knowledge that he’s Africa’s greatest…of all time.