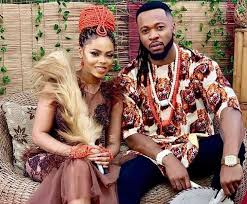 Chidedu Okoli, famously known as Flavour Nabania, is one of Africa’s most famous artists of all time. The highlife singer and his long-time Best friend, Chidimma Kedike has sparked romance rumors once again, after dropping a whole new album filled with love songs.

The speculation about Flavour and Chidinma’s romance started as far back as 2013, a few years after the Imo state beauty won Project fame, at the age of 18 in 2010. Becoming the star of the moment, Chidinma began to collaborate with other artists, but her connection with Flavour became much stronger, thanks to their intense passion and connection to music

From Falz to Phyno, Tekno, Kiss Daniel and of course Flavour. Every time Flavour takes a photo or hangs out with Yanga singer, fans believe something is going on romantically because it’s not just possible for two beautiful people to work together without any strings attached.

Flavour is from Anambra and Chidinma is Imo State. With only eight years age gap between them, what could be stopping two from getting together romantically and getting married?