Magasco and his team were spotted in Yaounde rehearsing ahead of his GOLDEN SHOW Concert which will hold at Palais Des Sports (Paposy), Yaounde on December 22, 2018. The Afropop singer who has been consistent in the Music industry with many hits under his belt UK will be performing alongside top Cameroonian ‘Afrobeats’ stars.

The Bamenda Boy is in full preparation for the most important and biggest concert of his career. The Empire Company artist teases his fans by showing rehearsals. Magasco remains one of Cameroon’s best ever Afropop Singer with hits like Sokoto, Wulle Bang Ban, Belinder, Under My Bed etc, and his fans will definitely wanna watch him showcase these, live at Paposy. 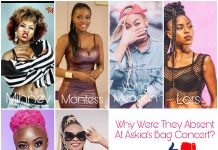